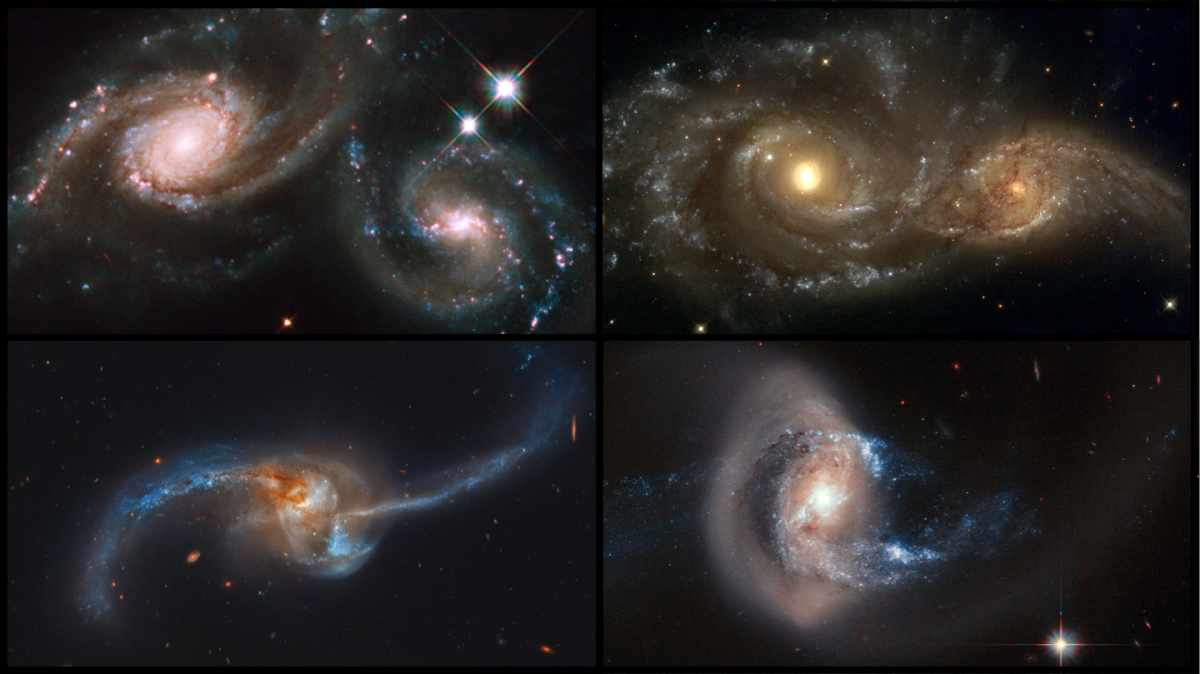 Astronomers see galaxies merging throughout the universe, some of which should result in binary supermassive black holes. Image: NASA

Astronomers believe that nearly all galaxies have supermassive black holes at their centers. When two galaxies collide, these black holes will slowly fall toward each other, finally merging long after the initial galaxy collision. In the last stage of this process, as the two black holes spiral closer to each other, strong gravitational waves can be produced.

While these waves travel at the speed of light, their strength varies quite slowly, on timescales ranging from months to years. This means that gravitational wave observatories on Earth can’t measure them. For that, you need an observatory with detectors light-years apart.

“We know that galaxy mergers are an important part of galaxy growth and evolution through cosmic time. By detecting gravitational waves from supermassive binary black holes at the cores of merging galaxies, we will be able to probe how galaxies are shaped by those black holes,” said Sarah Burke-Spolaor, assistant professor at West Virginia University.

Nature publication of the discovery of pulsar B1919+21. Credit: Reproduced by permission from Springer Nature

Fifty years ago, the February 24, 1968 edition of the journal Nature provided the solution, with the discovery of a new kind of star. This new star was curious, emitting regular radio pulses once every 1.3 seconds. Graduate student Jocelyn Bell (now Dr. Bell Burnell) was the first to spot the signal, seeing it as “a bit of scruff” in her radio surveys. Zooming in on the scruff, Bell saw the regular pulses from the star.

After first entertaining the possibility that the pulses could be the result of LGM, or “little green men,” the new star was dubbed a pulsar, with the understanding that the pulses represented the rotation rate of the star. Such a rapid rotation rate meant that the star must be small, about the size of a city. Only a few years later, a pulsar in a binary system was found, and the first mass estimate indicated that this tiny object held about one and a half times the mass of our sun.

“Before this time, no one thought stars so small could actually exist! It wasn’t until a pulsar was found at the center of a supernova remnant in 1968 that astronomers realized that pulsars were neutron stars born in the explosions of massive stars,” said Maura McLaughlin, professor at West Virginia University. 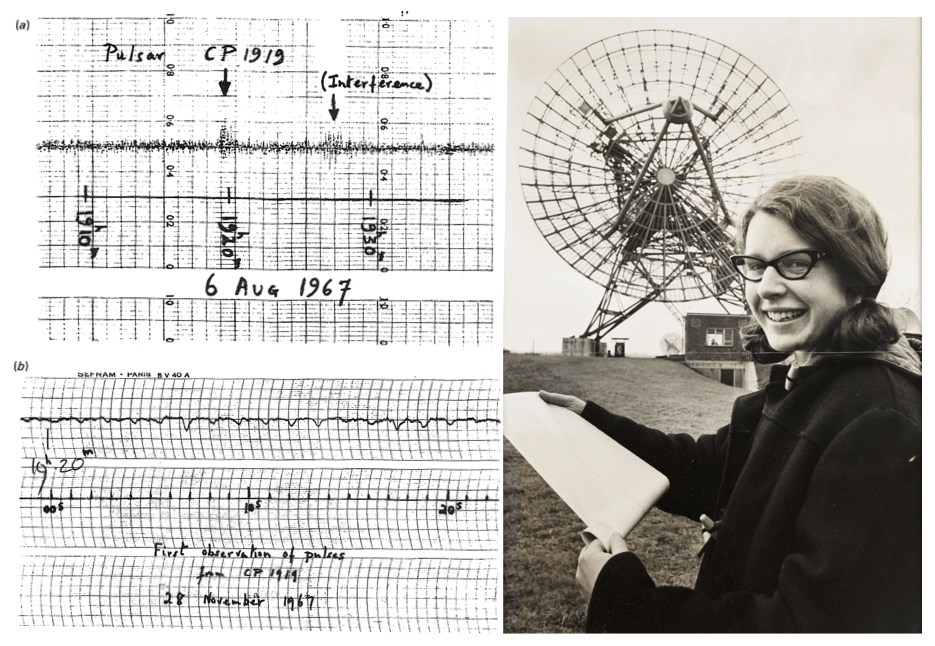 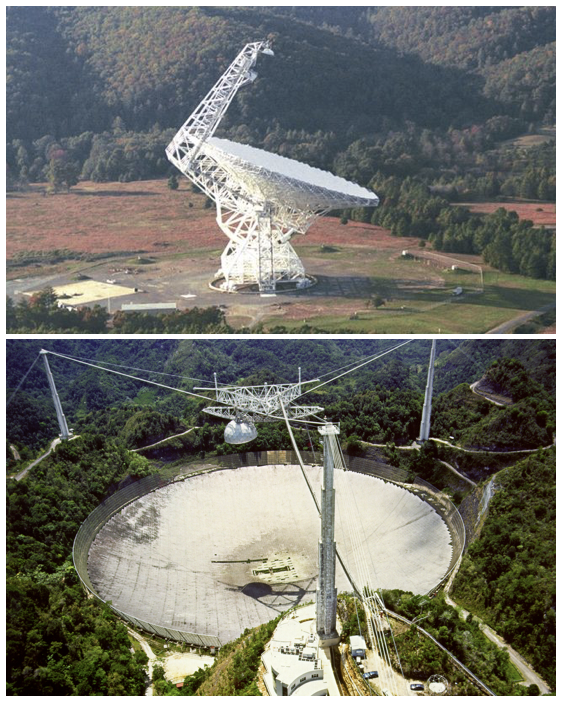 The fastest pulsars, called millisecond pulsars, spin hundreds of times every second (faster than your kitchen blender!), and are the most stable natural clocks known in the universe. Pulsar astronomers around the globe are monitoring these stellar clocks in order to form a new kind of cosmic gravitational wave detector known as a “Pulsar Timing Array.” By carefully measuring when radio pulses arrive from millisecond pulsars, astronomers can track the tiny changes in the distance from the Earth to the pulsars caused by the stretching and squeezing of spacetime due to a gravitational wave.

In the US and Canada, a group called NANOGrav (North American Nanohertz Observatory for Gravitational Waves) is searching for these gravitational waves using some of the largest telescopes in the world, including the Green Bank Telescope in West Virginia and the Arecibo Observatory in Puerto Rico. NANOGrav routinely joins forces with groups in Europe and Australia to improve their sky coverage and sensitivity. Collectively known as the International Pulsar Timing Array, the combined observations from these groups constitute the most sensitive data set in the world for searching for low-frequency gravitational waves.

This month, fifty years after the publication of the first pulsar discovery, NANOGrav has submitted a pair of companion papers to the Astrophysical Journal describing eleven years of monthly observations of 45 millisecond pulsars along with the astrophysical implications of their results. For the first time, the data set includes a six-pulsar “high-frequency” sample, with measurements made every week to expand the pulsar timing array’s sensitivity range. NANOGrav is able to set sensitive upper limits that constrain the physical processes at play in galaxy mergers. As their sensitivity improves, NANOGrav is uncovering new sources of background noise that must be accounted for. Most recently, uncertainties in the pull of Jupiter on the sun have been found to affect pulsar timing. As a result, the team is implementing new computational methods to account for this, in effect determining Jupiter’s orbit more precisely than possible except by planetary missions.

Since beginning regular observations in September 2004, NANOGrav has continued to add pulsars to their array. Sky image: Axel Mellinger

Last year, the journal that announced the discovery of pulsars once again played host to a pulsar first. In November, Nature Astronomy published their first-ever article describing the gravitational wave environment that pulsar timing arrays are working to uncover. By looking at galaxy surveys, the article estimates there are about 100 supermassive black hole binaries that are close enough to affect pulsar timing array measurements. Given their expected future sensitivity, the authors state that pulsar timing arrays should be able to isolate the gravitational waves from a specific individual galaxy within about 10 years.

“From city-sized pulsars spinning fast in galaxies to large, massive galaxies themselves and their merging central black holes, all in 50 years! That is a large step for humankind, and not one that we could have foreseen. What will the next 50 years bring? Pulsars and gravitational waves will continue to be big news, I’m sure!” said Jocelyn Bell Burnell.

A century after Einstein first predicted them, gravitational waves were finally detected. Now, 50 years after Jocelyn Bell’s discovery, pulsars have become a new tool for measuring both gravitational waves and the distant black holes that create them. If predictions are correct, the next decade will be an exciting period of discovery for radio astronomers, pulsars, and gravitational waves!