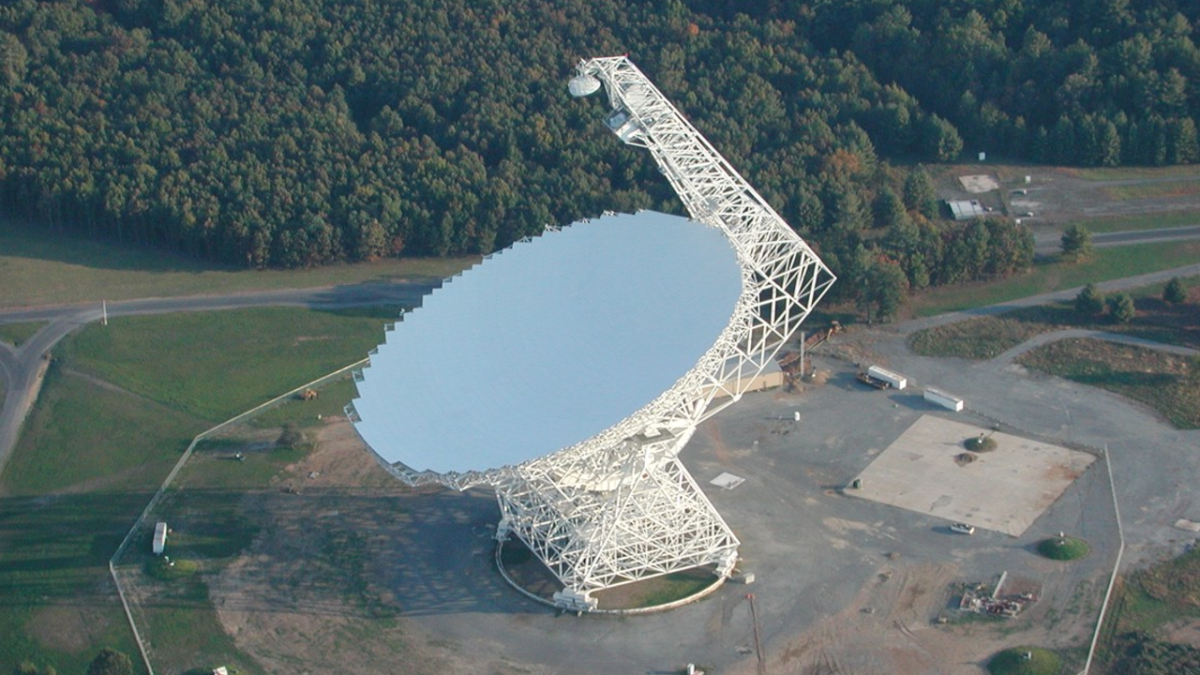 The Green Bank Telescope is located in Pocahontas County, West Virginia. With a 100 meter by 110 meter section of a 208 meter parabola, it has a reflecting surface of about 11,000 square meters and is thus the largest fully steerable telescope in the world. It also has an unblocked primary mirror, which allows it to detect more radio emission in a comparable time to telescopes with more traditional designs. With its innovative design and location, the Green Bank Telescope can see 85% of the total sky, and is therefore critical to achieve the sky coverage necessary for our project. It is located in the only U.S. National Radio Quiet Zone, in which radio transmissions are regulated to limit the amount of interference that might adversely affect our observations. In addition to providing monthly timing observations of the millisecond pulsars in our array, the Green Bank Telescope is also used to search for possible new additions to our pulsar timing array through the Green Bank North Celestial Cap pulsar survey, among others. Roughly 5% of the total observing time of the Green Bank Telescope is reserved for monitoring the pulsars in our array. 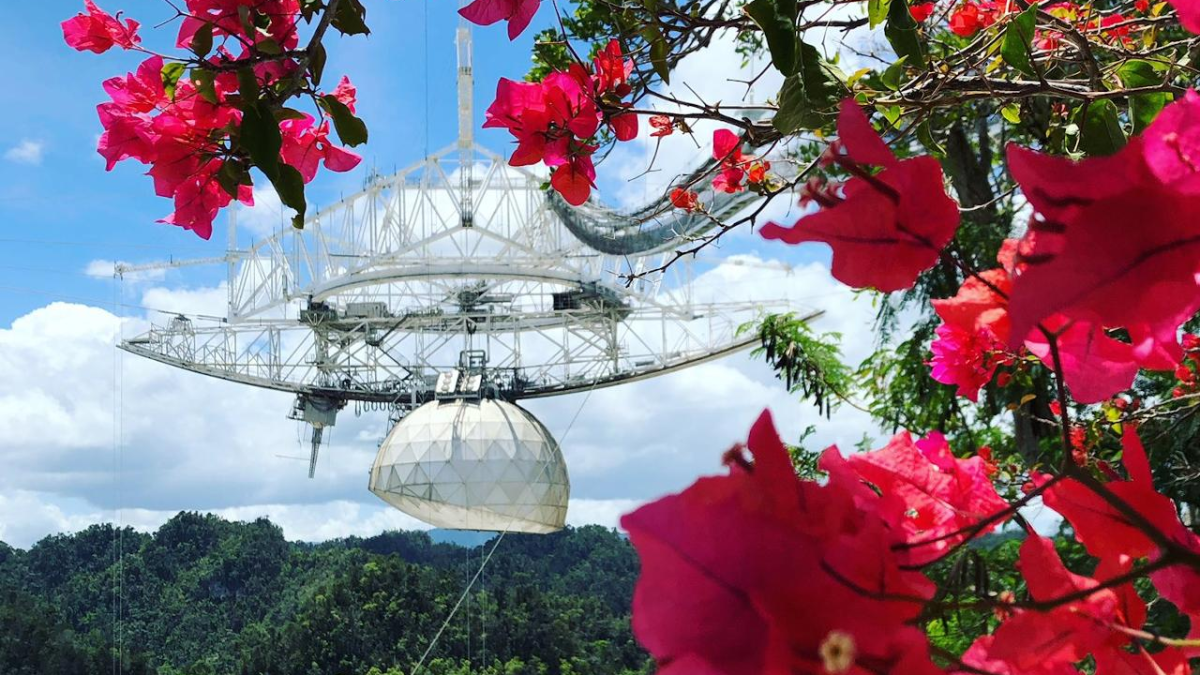 The Gregorian dome of the William E. Gordon Telescope at the Arecibo Observatory in Arecibo, Puerto Rico. This 300-m telescope was a cornerstone of NANOGrav observations until its collapse in December 2020. Image: SaveTheAO

The William E. Gordon Telescope at the Arecibo Observatory in Puerto Rico was the second largest radio telescope in the world at the time of its collapse in December 2020. The telescope had a 305-meter diameter spherical primary reflector, the size of 3 football fields, and could illuminate approximately 225 meters at a time. The spherical aberration correction was done using its secondary optics in the Gregorian dome. Given the enormous collecting area and the extensive observing frequency coverage, from 327 MHz to 10 GHz, with a 2-millimeter surface accuracy, the Arecibo Telescope was the most sensitive radio telescope in the world. Due to its size, the timing observations of pulsars obtained with the Arecibo Telescope were more sensitive than those with the GBT. The Arecibo Telescope was one of the primary instruments in pulsar searching, leading to the discovery of many pulsars, including highly stable millisecond pulsars that were ideal for NANOGrav-type sciences. The dish was so large and had to remain fixed on the ground, while the Gregorian dome could move in position with a limited capability. This led the Arecibo Telescope to access only a part of the sky with a range of 40 degrees in declination directly overhead the telescope.

The Very Large Array (VLA) in New Mexico. The VLA is comprised of 27 individual 27-m telescopes which are situated in a Y-shaped configuration with an 11-mile long north-aligned arm and two 13-mile long arms. Image: VLA / NRAO

The Karl G. Jansky Very Large Array (VLA) is a radio interferometer in New Mexico with comparable collecting area to the GBT, but with improved sensitivity at high (2 GHz) frequencies. This is particularly advantageous for the most distant MSPs in the Galactic plane which are strongly affected by the interstellar medium. The VLA can also observe more of the southern sky than the GBT, providing access to additional MSPs which broaden our sky coverage and enhance our GW sensitivity. 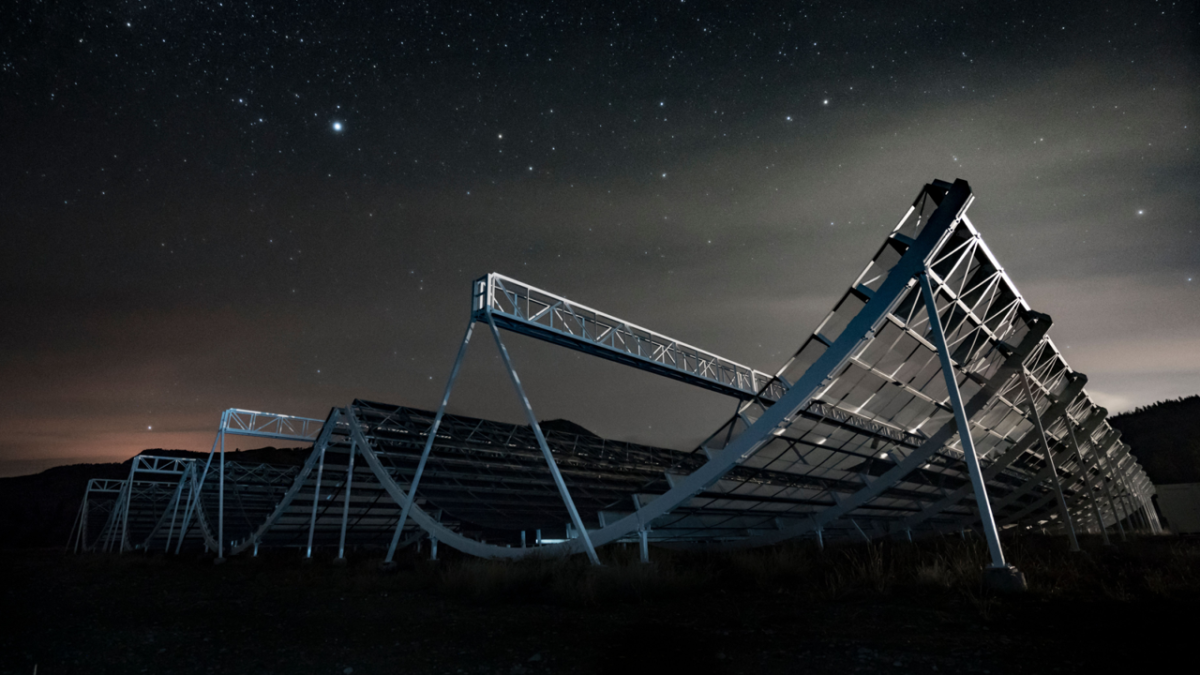 The Canadian Hydrogen Intensity Mapping Experiment (CHIME) telescope at the Dominion Radio Astrophysical Observatory in Penticton, British Columbia.  CHIME is a transit telescope with collecting area roughly equivalent to that of the GBT. Image: CHIME Collaboration