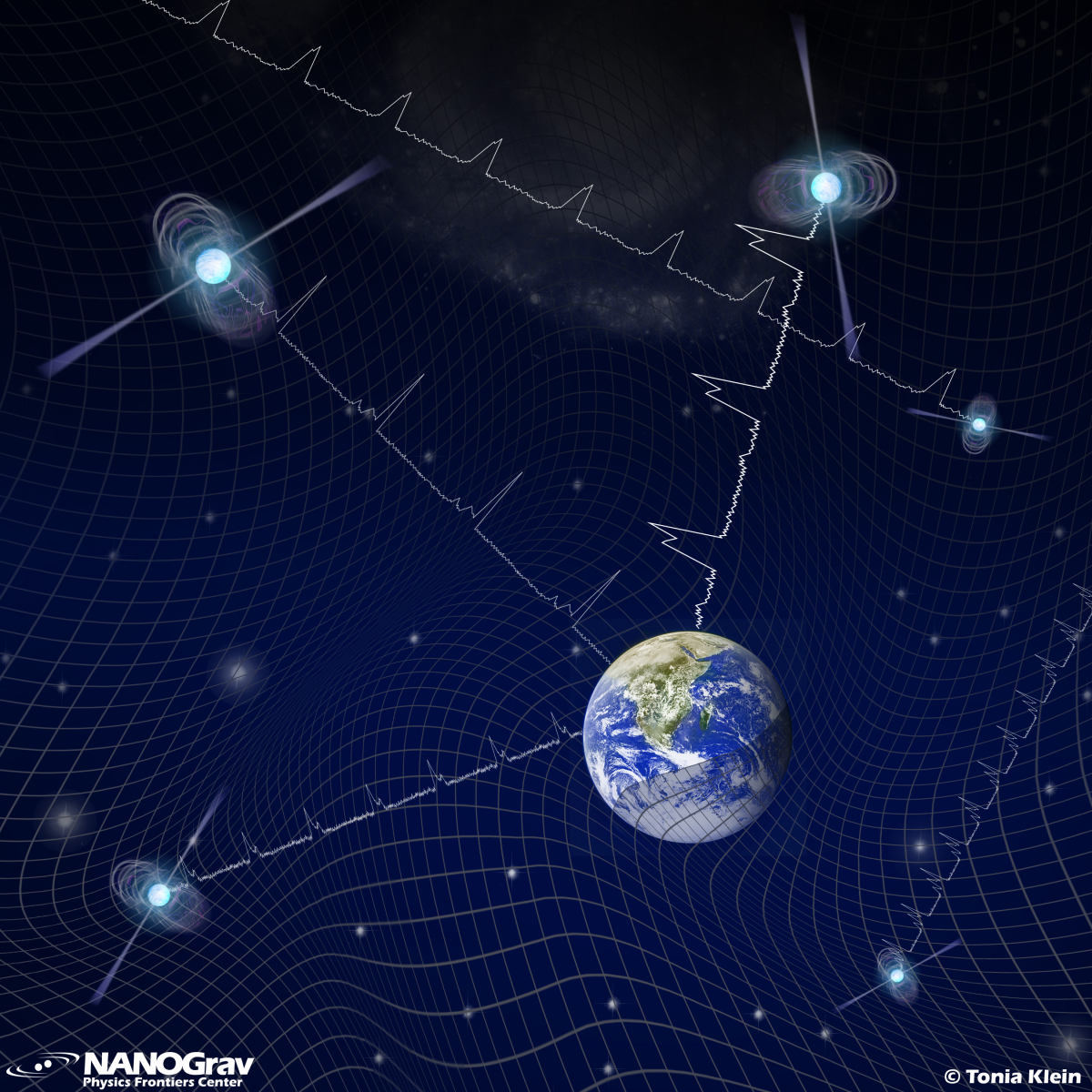 An array of millisecond pulsars in our galaxy is sensitive to a gravitational wave background produced by supermassive black hole binaries distributed throughout the Universe.  Illustration: Tonia Klein / NANOGrav

An international team of astronomers, including members of the North American Nanohertz Observatory for Gravitational Waves (NANOGrav), has announced the results of a comprehensive search for ripples in the fabric of space-time – known as gravitational waves. The team searched for low-frequency gravitational waves, which can originate from supermassive black hole binaries residing in galaxies or from events occurring soon after the formation of the universe in the Big Bang. Detecting these low-frequency signals will open a brand-new window in the gravitational wave spectrum and help scientists enhance their understanding of the evolution of galaxies, their central black holes, and the early universe.

The International Pulsar Timing Array (IPTA) consortium, which weaves together the work of several astrophysics collaborations worldwide, recently completed the GW search analysis using its latest official data release, known as Data Release 2 (DR2). This data set consists of precision timing data from 65 millisecond pulsars – stellar remnants which spin hundreds of times per second, sweeping narrow beams of radio waves that appear as pulses due to the spinning. The data is the result of combined independent data sets from the North American Nanohertz Observatory for Gravitational Waves (NANOGrav), the European Pulsar Timing Array (EPTA), and the Parkes Pulsar Timing Array in Australia (PPTA). These are also the three founding members of the IPTA.

NANOGrav uses the 305-m Arecibo Observatory telescope in Puerto Rico, the 100-m Green Bank Telescope in West Virginia, the Very Large Array in New Mexico, the CHIME telescope in British Columbia, Canada, and recently the FAST Telescope in China, to observe millisecond pulsars. The collaboration contributed data from the 37 pulsars included in its 9-year data set to the IPTA DR2; those data were combined with pulsar data from EPTA and PPTA telescopes to produce the full DR2. NANOGrav has since produced 11- and 12.5-year data sets, and is currently timing 78 millisecond pulsars. NANOGrav also recently reported independent evidence of a potential gravitational-wave signal in its 12.5-year data set. Using the tools and techniques developed for their work, NANOGrav members have played a leading role in the analysis of the IPTA DR2.

This new search from the IPTA includes an extensive comparison between individual data sets from the large regional scientific collaborations and the combined data set. The GW search of the IPTA DR2 has revealed strong evidence for a low-frequency signal detected by many of the pulsars in the combined data. The characteristics of this common-among-pulsars signal are in broad agreement with those expected from a GW “background” (GWB). This background is formed by many different overlapping GW signals emitted from the cosmic population of supermassive binary black holes (i.e., two supermassive black holes orbiting each other and eventually merging), analogous to background noise from the many overlapping voices in a crowded hall. This result further strengthens the gradual emergence of similar signals that have been found in the individual data sets of the participating collaborations over the past few years.

“This is a very exciting signal! Although we do not have definitive evidence yet, we may be beginning to detect a background of gravitational waves,” said Dr. Siyuan Chen, a member of the EPTA and NANOGrav, and the leader of the IPTA DR2 search and publication. Dr. Boris Goncharov from the PPTA cautions on the possible interpretations of such common signals. “We are also looking into what else this signal could be,” Goncharov said. “For example, perhaps it could result from noise that is present in individual pulsars’ data that may have been improperly modeled in our analyses.”

To identify the GWB as the origin of the low-frequency signal, the IPTA must also detect spatial correlations between pulsars; this means that each pair of pulsars must respond in a very particular way to the GWs, depending on their separation on the sky. These signature correlations between pulsar pairs are the “smoking gun” for a GWB detection – without them, it is difficult to prove that some other process is not responsible for the signal. Intriguingly, the first indication of a GWB would be a common signal like that seen in the IPTA DR2. Whether or not this spectrally similar low-frequency signal is correlated between pulsars in accordance with the theoretical predictions for a gravitational-wave background will be resolved with further data collection, expanded arrays of monitored pulsars, and continued searches of the resulting longer and larger data sets.

Consistent signals like the one observed with the IPTA analysis have also been published in individual data sets more recent than those used in the IPTA DR2, from the three groups that are part of the project. The IPTA DR2 analysis demonstrates the power of the international data collection giving strong evidence for a GWB compared to the marginal or absent evidence from the constituent data sets. Additionally, new data from the MeerKAT telescope in South Africa and from the Indian Pulsar Timing Array (InPTA), the newest member of the IPTA, will further expand future data sets.

“The first hint of a GWB would be a signal like that seen in the IPTA DR2. Then, with more data, the signal will become more significant and will show spatial correlations, at which point we will know it is a GWB. We are very much looking forward to contributing several years of new data to the IPTA for the first time, to help achieve a GWB detection,” says Dr. Bhal Chandra Joshi, a member of the InPTA.

Given the latest published results from the individual groups who now all can clearly recover the common signal, the IPTA is optimistic for what can be achieved once these are combined into the IPTA Data Release 3. Work is already ongoing on this new data release, which at a minimum will include updated data sets from the four constituent PTAs of the IPTA. We expect the analysis of the DR3 data set to be finished within the next few years.

“If the signal we are currently seeing is the first hint of a GWB, then based on our simulations, it is possible we will have more definite measurements of the spatial correlations necessary to conclusively identify the origin of the common signal in the near future,” said Dr. Maura McLaughlin of the NANOGrav collaboration.

Dr. Xavi Siemens of the NANOGrav collaboration agrees. “It’s very encouraging to see a signal in the IPTA that has similar characteristics as the signal seen in NANOGrav,” he says. “As both NANOGrav and the IPTA continue to grow their data sets, they can serve to check each others’ results, and can expect to detect similar, stronger signals over time.”